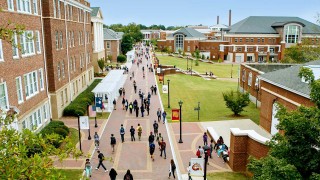 Recruitment gets down to earth, from the cloud.

Implement a recruiting/CRM system capable of growing with the institution

Entering the same data in more than one place increases the potential for error, creates unnecessary steps, and simply frustrates users. They expect a “smart” computer application to populate data fields after the first entry and anticipate their next step in a task-based activity.

At Winthrop University, staff and prospective students learned to live with this quirk, the workaround for report generation, and other limitations of the constituent relationship management (CRM) system. Only when they had the opportunity to upgrade did staff realise how cumbersome their old system was.

Not wanting incremental improvements that would fail to solve all the challenges, the administration at Winthrop moved forward with a new CRM and selected Ellucian CRM Recruit because of its contemporary functionality, and because of its tight integration with Ellucian Banner®, the existing ERP.

The bi-directional feed between Ellucian CRM Recruit and Banner works well with verifications and distributions. No other CRMs did this—they all did it with batching, and we initially looked at 25 of them.

An enrolment system that saves staff and students time.